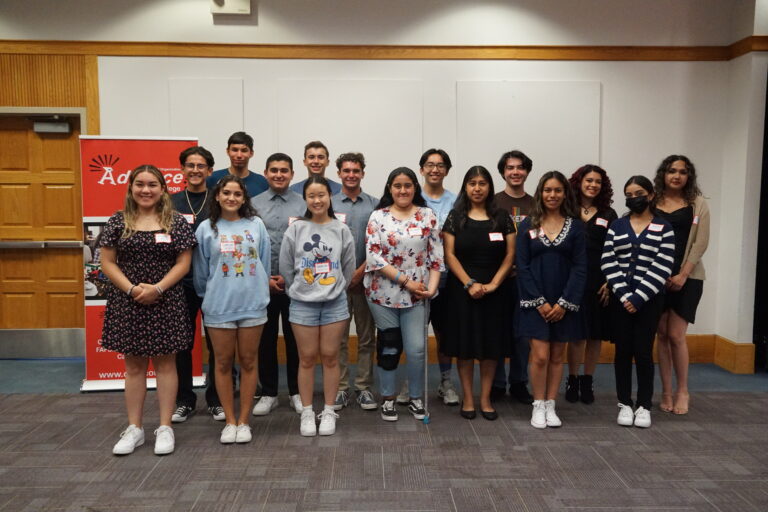 Every year Advance! offers scholarships to graduating La Habra and Sonora seniors. The application for 2022 graduates is currently closed. Check back here next year in February for the 2023 application.

These scholarships are named for a remarkable woman, Artemisa Garcia.  While she and her husband were raising their four kids she worked in the cafeteria of the middle school that they all attended.  After raising them she decided to go to college.  She became a teacher, a counselor, a vice principal, a bi-lingual coordinator and, finally, a principal.  During her entire career in education her passion was to motivate children to do their very best, go to college, and be successful.  She eventually lost a long struggle with cancer.  Twenty years later her adult children approached Advance! to ask them to award scholarships in her name.

A family in Fullerton lost their son Alex to cancer on Christmas day in 2006 when he was only half-way through is freshman year at Pomona College.  Even though he was a graduate of Troy High School in Fullerton, his parents asked Advance! to find deserving students in La Habra for these scholarships.  Advance! awards two of these scholarships every year.

These scholarships are presented to honor the two deceased sons of Michael and Marilyn Augustine.  Rex Augustine, a 1982 graduate of La Habra High School, was killed by a drunk driver in 1986.  Another Augustine boy, Steven, died of a brain tumor when he was only three.  This family wants to give other young people the opportunity for a college education that their two sons didn’t get to enjoy because their lives were cut short.  The Augustines, especially their son, Michael, have funded four Advance! scholarships every year since 2006.

“Cash 4 College”, a division of the California student Aid Commission based in Sacramento, encourages organizations like Advance! to help as many students as possible fill out their free application for Federal Student Aid (FAFSA). For every 25 students who complete their FAFSA with one of these agencies, Cash 4 College provides a $1000 scholarship, chosen by lottery.

This scholarship carries the name of Dan Casey, who was executive director of the Boys & Girls Clubs of La Habra for many years.  He and his wife Cathy had two sons, Alex and Nolan, both of whom attended Sonora High School.   Dan was a long-time advisor to Advance!    He lost his battle with cancer in 2017. Advance! is honored to award two scholarships in his name.

Advance!’s co-founder, Fred, taught for 34 years, first at Lowell High School in Whittier and then for 25 years at La Habra High School before he and a former student of his established Advance! in 2002.   For his 70th birthday, Fred was surprised to learn that friends and family agreed to set up a scholarship fund in his name, enough to fund two awards annually.

These scholarships are funded primarily by two anonymous donors and are awarded primarily to students who are already in college and who need help continuing.

Advance!’s newest scholarship, established 2018, is funded by two long-time La Habra High Staff members who recently retired.  This annual scholarship will go to a student who is entering nursing or another health field.

The Institute for Healthcare Advancement is a large medical facility in La Habra that houses Advance!’s college counseling center.  IHA provides funds to Advance! to assist students who are committed to entering the medical/healthcare field.  Their initial commitment was to help four students for all four years of their undergraduate work.  They are continuing their support for two of those students beyond their four undergraduate years.

A young man who graduated from one of La Habra’s two public high schools was the victim of gang violence back in 2008.  The “JMR Foundation” was established in his name and in 2016 his family came to Advance! and asked if it would honor their son with two scholarships every year.

For several years Advance! awarded a scholarship at its annual community-wide event called “La Habra Goes to College” to a local high school senior in attendance.  Ten of these scholarships were awarded between 2006 and 2012.

Tarek Captan was a 1993 graduate of La Habra High School.  He went on to graduate from UCLA and then devoted all his time and energy to help low-income, at-risk youth in Los Angeles break out of the cycle of poverty and lead a better life.  In 2006, while crossing a street in LA., he was killed by a drunk driver.  Tarek’s dad, Habib, is now Advance!’s office manager and treasurer.

His wife, Tarek’s mother, along with their two sons, who are also La Habra High graduates, are proud to award two scholarships every year in Tarek’s name.

La Habra High School’s Class of 1985 lost one of its classmates just two weeks before graduation in a freak jeep accident over Memorial Day weekend.  Since then every year his closest friends in that class have been honoring Trino by helping make college possible for a graduating senior from LHHS.

The student council of Sierra Vista, a K-6 school in the La Habra City School District, came up with the idea of awarding a college scholarship for graduating seniors at Sonora High School. Candidates are interviewed by a panel from the school’s student council and the scholarship recipients are honored at the schools annual end-of-year assembly.